Skip to content
Home » Blog » Uncategorized » What’s in a Name? 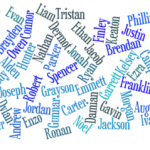 Some puppies and dogs come to us with names.  For many of us, part of the joy in getting a new puppy is the fun we have with choosing the best name.

Many respected breeders have a kennel name and a theme for each litter of puppies, which can add to the naming challenge.  New owners will spend a little while getting to know their new pup before finalizing a name and then registering the puppy.

Some older puppies and dogs that are being rehomed have names that may not truly fit their personalities.  New families may feel that a fresh start should include a fresh name.  Changing a dog’s name is not as difficult as you might think; just approach the name change as you would if you were naming a new pup for the first time.  Use treats to reinforce attention every time you say the dog’s name.

When it comes to choosing your dog’s call name, here are some things to consider:

If you’re not currently in the process of naming your new family member, save this article for the future.  If you want your current dog to be more attentive when you do say his name, remember that attention is a two-way street.  If you expect attention you need to give attention.  Attending classes is a great way to work on attention and responsiveness around distractions.

What is in a (dog’s) name?? A whole pack of things to think about!